skip to main | skip to sidebar

Die Doing Something You Love

"To die doing something you love."
I encountered variations of this phrase three times Saturday.

1. In Chris Jonnum's biography of the Haydens, the on track death of flat-tracker Will Davis. Davis was a hero of Nick Hayden's. Mourning his death, Nick said that there is no tragedy if you die doing something you love. Nick did run his next road racing victory lap backwards in Davis' honor.

2. On the DVD of The Race to Dakar, Andy Caldicott died doing the thing he loved, as described by Charlie Boorman. No one will be permitted to die this way this year, since ASO has cancelled the Dakar race due to threats for terrorism. (You can die doing what you love, not what Al Qaeda loves.)

3. Andy Olmstead states in his posthumous blog post that he died doing the job he loved.

If you love your job, you can accept any level of risk.

Posted by Dutcher Stiles at 7:47 PM

The thoughts expressed here are my own. 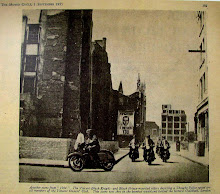